The Good Old Off Season, As Confusing And Unsuccessful As Ever…

So the season is over, the racing bike is back in the shed and the long winter months are upon us, but what happens now? Where do all these riders go to? If you’re a ‘normal’ member of society no doubt this change doesn’t seem a big deal, maybe you will swop your summer stead for the trusty winter machine, find the lights you hung up last year and carry on your daily lives like nothing much has changed, but if you’re a full time cyclist this change is much bigger and more disturbing than you could ever imagine.

The easiest way to describe this is to split it into stages, so here goes I’m going to let you into the unknown world, give you an insight to where everyone of ITV4 fame (sort of?!?) goes.

Stage one is best described as ‘unsuccessful social season’, it’s the same every year, the racing bike goes away, the phone starts beeping and large groups of cyclists gather at charity events or show’s where after a meal and some speeches are taken care of, everyone forgets they haven’t drunk much in the last eight months and gets stuck into a session they really can’t back up. It all gets messy and everyone makes big statements of intent for next season. It’s ridiculous and tends to go on for a good month or so before the realisation that cyclists although capable of putting on a good party are rubbish drinkers! This problem is multiplied if you have to go to a non-cycling related party in which case you try to keep up with people who aren’t built out of nothing like us cyclist’s and can drink you under the table, stay away from these gatherings they are dangerous!

Stage two is a combination of DIY and too much coffee, after the ‘unsuccessful’ drinking season hasn’t gone down with your other half too well, you will promise to fix everything in the house that has broken over the last eight months of the racing season to repair the situation. Although the problem with that is when a cyclist is left at home all day, the majority of that day will be spent thinking about fixing things and not actually fixing them as the permanent state of ‘coffee bonk’ takes hold as the coffee machine takes the full brunt of a day at home, you will end up with an ‘unsuccessful’ DIY season at the end of this stage, much the same as the before mentioned drinking merry go round!

Into stage three and by now most cyclist’s will either have started to beat themselves up about been unfit, got bored of destroying the house through DIY or waking up in the morning after having been drunk under the table by a rugby player again. Now they will have begun to think about starting some sort of comeback. The main problem of this stage is that it involves getting the winter bike together and no matter how well you looked after it before you put it in the shed last year it isn’t going to work. My own personal list of problems this year involved a stuck seat pin (that was 2cm to short? Work that one out), and a distinct lack of working brakes. This is the time of year you are most likely to see domestic pro’s in their local bike shops as they attempt to head off on rides but lose bits of the winter stead on route and have to bail into the shops for help, if your after your favourite domestic pro’s autograph this is the best time of year to be creeper and hang around in bike shops.

The light at the end of the tunnel will start to show by now though, the realisation that a comeback to training is required or more that it’s easier hiding out on the bike than having to attempt DIY SOS LIVE at home has hit all cyclist, you will start to see them come out of the stages as you read about where they and their team have taken off on a training camp to get ready for the coming season. These training camps are where the demons of the winter are thrown off and cyclists become cyclists again, back to reality and the safety of the bike!

Important! No cyclists were hurt in the process of this blog!

Cycle Show, TOB and other news…

Please accept my apologies for such intermittent blog updates. Here is a picture of what I have been doing this week. In the photo me (left) Darren Moore right and middle. We spent the day at the Cycle Show at the NEC yesterday which was great. An opportunity to speak to everyone under one roof. It did feel a bit like a pressure cooker with people I wanted to speak to every 10 paces but was very pleased to have got everything done that we set out to do.

The main story I suppose was my signing for the UK Youth team with Magnus Backstedt. I am so excited, we have talked about racing together for years and I’m so pleased that next year will be the one. The team line up look s great and I am so excited to be back up to international UCI level. After co-presenting on ITV4 for the TOB (Tour of Britain) it was great to see the home based guys getting stuck in and mixing it with the big boys over from the continent.

Another interesting thing to talk about maybe, is this time of year. Its end of the season and were all looking to next year with more articles of who’s signed for who coming out every day now and is set to continue as the last riders find their places. But its not over yet. Part of the season is the end of the season. A time to look back and asses the performances of the year for both myself and other riders, especially up and coming ones. I’d like to give a quick mention of some to watch next season.

I think best improved rider of the year is Tom Last (Sigma sport Specialized) The Richmond GP (last premiere) was where I really noticed the lads strength. At the top of the last climb we were down to about 12-15 riders left in the group and Tom was there giving it big licks in the finale. A real talent and one to watch next year.

Ride of the Year for me was JTL (John Tiernan-Locke) on stage 5 of the TOB attacking and dropping some of the best riders in the world up the climb to Hay Tor in Devon on home roads, with home crowd and on the most glorious day. Made me proud he did as I watched from the lead car. Thoroughly deserves a proper world tour team contract.

Most Charismatic rider. For me Mark Cavendish is head and shoulders above the rest. He is a megastar. Even before the worlds win he was getting such a warm and positive reception every stage start and finish on the TOB. I had the pleasure of interviewing him a couple of times on the race and thought he was such a good personality for the sport in this country but for the world of cycling too. Cav if you read this keep up the good work you are a hero to many.

Nicest guy in the peloton. Alex Dowsett, But also the smoothest pedal action too which helped take stage 8a at the TOB along with many more wins to come. They say you shouldn’t meet your heroes but in the case of Dowsett its not true. If you do get to say hello you will go home glad you made the effort.

I could go on and on here, so will save a bit for later which will also give me a reason to keep up dating this blog.

Morning After The Night Before 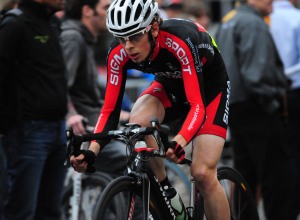 The National Criterium Championships have been and gone and I’ve just woken up Saturday morning ‘the day after the night before’, it’s a strange feeling waking up with a bronze medal. Last night I was over the moon with it but now it’s sat here looking at me all I can imagine is that it’s not a medal but a giant clock that’s already started counting down to the championships for 2012, which is annoying… really annoying!

But don’t get me wrong, this clock can count all it want’s, I’m happy this morning. Since this exact day last year when I woke up having been caught in the last half lap on the very same course at the 2010 version of the title race I’ve had this annoying itch, in the back of my brain telling me how 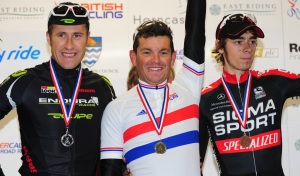 close I was to pulling off a medal, standing on the podium for both myself and the team, taking the plaudits and giving the interviews. I didn’t fancy another year of that so I put a lot into that Friday night and I’d like to think I rode it to win in my own attacking style, sometimes you have to risk losing to win a race. You can’t be a headless chicken but you have to give it some stick every once in a while. I saw in the post-race reaction’s that Rapha Condor Sharp expected me to attack going into that last lap, that’s no surprise the amount of criterium events the British riders have ridden together this year they probably knew where I was going to eat three hours before the event too, but there was no chance of me just laying down and accepting a medal without shooting for the stripes.

I don’t have any regret’s this morning I can’t think of too many things I’d have done differently so although this bronze medal has now put another itch in the back of my brain telling me on a loop that there’s a national jersey I was pretty close to there, this is a different itch, it’s not annoying me now, well not just yet anyway.